A genealogical table, to get the big picture about dynasty and succession:

The dynastic storyline is not complicated. None of Henry VIII’s children produced an heir or heiress. 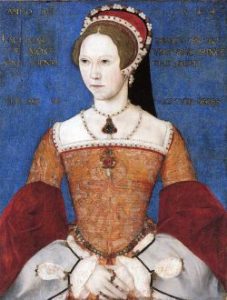 Princess Mary, daughter of Catherine of Spain, in 1544

Mary: 300 in five years, while she had the support of neighboring nation-states;

Elizabeth: 200 in forty-five years and only four for heresy (Anabaptists). The other executions were done for challenging her right to rule in a heated context of assassination attempts and plots and international opposition to the point of five Spanish Armadas.

So many believe, not without reason, that she deserved the epithet “Bloody Mary.”

(Jane Grey, Queen of Nine Days: she was not a Tudor)

Elizabeth I, Part 3: The Coronation

Elizabeth I, Part 7: Her Male Favorites

Elizabeth I, Part 8: Summary and Death

G.. J. Meyer, The Tudors: The Most Complete Story of England’s Most Notorious Dynasty (Bantam, 2011).

John D. Woodbridge and Frank A. James, Church History from Pre-Reformation to the Present Day: the Rise and the Growth of the Church in Its Cultural, Intellectual and Political Context, vol. 2, (Zondervan, 2013).