He was the grandfather of William the Conqueror and as duke ruled Normandy from 996 to 1026. Richard’s son Richard III (the Conqueror’s uncle) is included in this post since he ruled only from 1026 to 1027, about twelve months.

Let’s get started with his ancestry. Here are the Anglo-Normans all the way to Henry II, the first Plantagenet, from C. Warren Hollister’s Henry I: 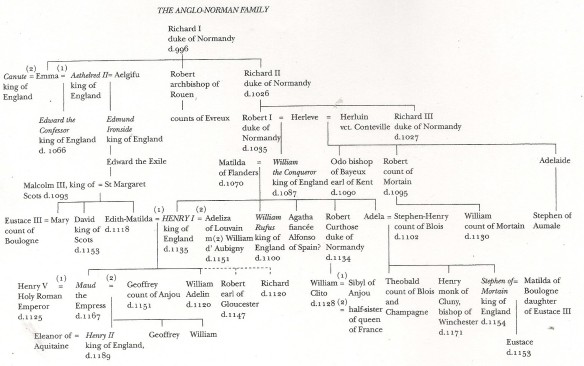 It is difficult to find basic facts and stories about the early House of Normandy. Here is the best I could scrape together.

Here is a portion of the contract between Judith and Duke Richard:

Instructed by the compilation of such examples and authorities. I Richard, filled in God’s name with a desire for God-fearing children, so to have them down the course of years, if such should be the Creator’s merciful will, have taken you O Judith, sweetest of spouses and most tender of wives, in love, I have sought you from your kinsfolk and relations, and I have espoused you with bridal ornaments. (qtd. in Crouch, p. 55, slightly edited)

Here is an excerpt from Medievalist Marjorie Chibnall on Richard II’s family expansions and marriage alliances.

From the beginning of his reign, Richard II was helped by his uncle, Raoul [Ralph] of Ivry, the half-brother of Richard I; and from 1010 he used his ducal status to nominate other kinsfolk as counts under himself. His brother Mauger became count of Corbeil; and his half-brothers, William was made count of Eu, and Godfrey’s son Gilbert of Brionne, was in time given the title of count. His brother Robert, archbishop of Rouen, fathered Richard, later count of Evreux. Two of the sons of Raoul of Ivry became bishops: Hugh of Bayeux and John of Avranches; his daughter Emma married Osbern the steward, a nephew of the duchess Gunnor and later the devoted guardian of the young Duke William [future Conqueror and king].

Marriages helped to stabilize relations with neighboring rulers. Conflicts with Brittany were checked for a time by a double marriage. Geoffrey, duke of Brittany (992-1028), the son of Conan I, married Duke Richard’s sister Hawise, and Richard himself married Geoffrey’s sister Judith. After Geoffrey’s death on a pilgrimage to Rome, Duke Richard became guardian of his two sons, Alan and Eudes [Odo]. So began a period in which the dukes of Normandy claimed with varying success some type of lordship over Brittany; and in spite of renewed hostilities in the time of Robert I (1027-35), the Norman dukes succeeded in tightening their hold on the territory up to the river Couesnon, and firmly establishing their influence in Mont-Saint-Michel. Another marriage was even more momentous in its consequences. Duke Richard II’s sister, Emma, became the wife of King Æthelred of England, and established a bond that was later to provide Duke William with a claim to succeed to the throne of England by hereditary right. (pp. 21-22)

Rolf or Rollo the Viking

THE HOUSES OF NORMANDY AND BLOIS

Richard I, Norman Marquis and Count

Robert I, Duke of Normandy

Matilda: Wife and Queen of William the Conqueror

(They lived after the Normans and Blois)

Edward I: Interesting Facts and Stories

Eleanor of Castile: Interesting Facts and Stories (married to Edward I)

Edward III: Better Than Most

Edward V: Prince in the Tower

David Crouch, The Normans: The History of a Dynasty (Hambledon and London, 2002).

Earl of Onslow, The Dukes of Normandy and their Origin (Hutchinson, 1945)