There are several Pippins among the Carolingians. This Pippin (773-810) was Charlemagne’s son and the father of Bernard, king of Italy.

To get an overview, let’s insert Constance C. Bouchard’s table of kings, dukes and counts, some of whom descend from Charlemagne. Her main point in the entire article at the American Historical Review is to show that new noble families emerged in the Medieval Age, who were not necessarily connected to long family lines. For our purposes, however, this table shows how the Carolingians relate to the Capetians and also to Eleanor of Aquitaine, who married Henry II, a Plantagenet.

Charlemagne’s son Pippin died in 810, while his father died in 814, so Pippin did not get any of the empire, which means his line became collateral or less important than Louis’s line, Charlemagne’s surviving son.

But Pippin’s line has importance to us today. Note Hugh Capet on the left side of the table. He is the namesake of the Capetians.

And here is Becher’s Table: 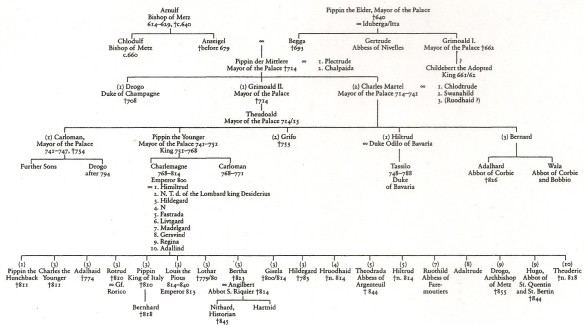 He was born Apr 773 and was originally named Carloman. Charlemagne proclaimed Carloman king of Italy, on a second pilgrimage to Rome to celebrate Easter with his wife Hildegard, daughter Gisela, and son Louis. Charlemagne had his son Carloman baptized at Rome by Pope Hadrian on 15 Apr 781, and that time the four-year-old was given the name Pépin or Pippin after his grandfather. He was installed at Pavia under the tutelage of Charlemagne’s cousin Adalhard and other Frankish officials.

“He had his own court, administrative personnel and diplomatic emissaries, and also promulgated his capitularies. But in fact he remained his father’s delegate and acted accordingly. Frankish counts and soldiers were established in local towns, and abbeys from across the Alps received Italian lands” (Riché p. 99) (A capitulary was a document recording legislative acts). Pippin was king of Italy from 781-810. Thus the Lombard kingdom (northern Italy and beyond) and other parts of the Italian peninsula fell under Carolingian legislation.

In 791 Pippin was engaged in the wars against the Avars (Huns). The “great campaign began with the celebration of Masses, fasts, and prayers to secure ‘the safety of the army, the help of the Lord Jesus Christ and the defeat and punishment of the Avars’” (Riché p. 108). Pippin advanced from the south. At first it bogged down, but then Pippin received the mission to launch a new expedition and captured and destroyed the Ring, some sort of fortified “capital,” in 795. The victors took the treasures and carted them home, needing fifteen wagons, each drawn by four oxen.

Human memory can recall no war against the Franks which so greatly profited and enriched them. Indeed, although up to then they almost seemed to be paupers, they found so much gold and silver in the palace of the khagan, such spoils carted off by force of arms, that we can rightly believe that the Franks justly took back from the Huns what they had formerly taken from others unjustly  (qtd in Riché p. 109).

When Charlemagne was getting older, he divided his empire and entire realm into three parts. Louis got the lands south of the plateau of Langres down to the Mediterranean. To Pippin’s Italian kingdom Charlemagne added Bavaria, Carinthia and half of Alemanni. Charles was to inherit everything else. However, Pippin died in 810 and Charles in 811, so Louis got all of it. As noted, this means that Pippin’s line became collateral, when later generations had to select a king. Until Hugh Capet, Pippin’s line was often overlooked.

By his mistress, Pippin had one illegitimate son Bernard.

By an unknown wife or mistress he had five daughters:

Unfortunately the details of their lives are not known (or no one has studied them). Pippin was, after all, a son of minor significance compared to his brother Louis the Pious, Emperor.

Pippin, Great-Grandson of Charlemagne (transition to the House of Vermandois)

Herbert I, Count of Vermandois

—, Those of My Blood: Constructing Noble Families in Medieval Francia (U Penn P 2001)