Born in 1312, crowned 1327, and dying in 1377, Edward III was king of England for fifty years. He was highly regarded by the people of his times and for centuries after.

Even Queen Victoria and Prince Albert used to dress up like Queen Philippa and King Edward in fancy-dress balls. Edward established the Noble Order of the Garter in 1348. 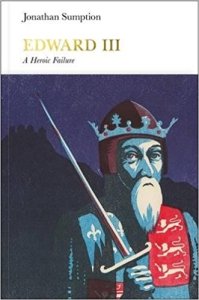 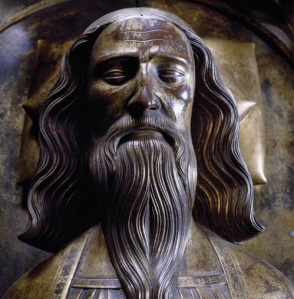 Here’s the table by Dan Jones, The Plantagenets: 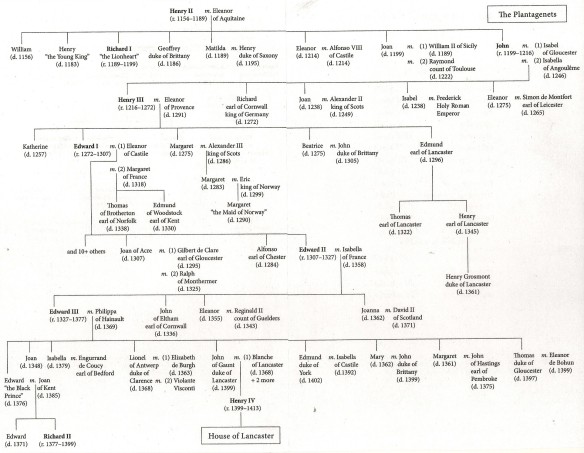 The above table gives a good overview of the entire Plantagenet family. 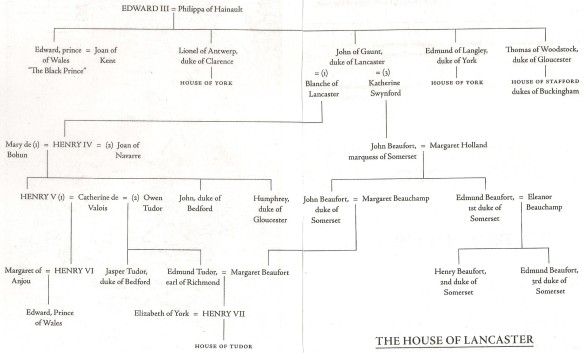 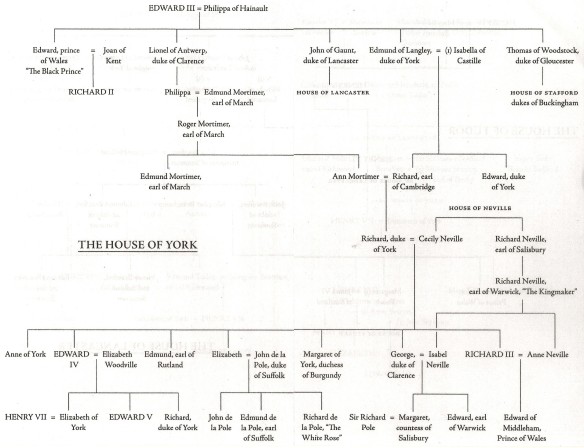 Valois Kings from the Encyclopedia of Medieval France: 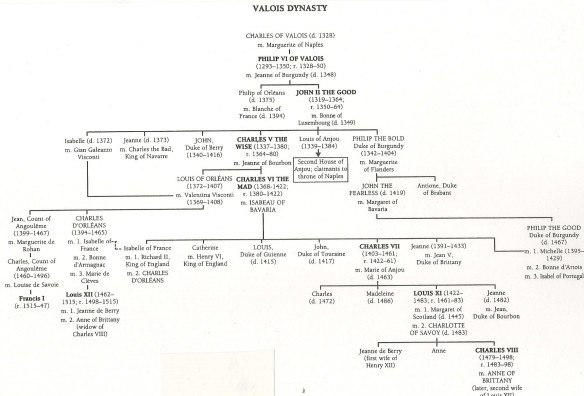 Philippa: She was the daughter of William the Good, count of Hainault, Holland. They had eleven children. Her (future) mother-in-law Queen Isabella arranged the marriage. Philippa died at Windsor Castle 15 Aug 1369. Edward died at Sheen Palace (now Richmond), Surry, 21 June 1377. He and his wife were buried at Westminster Abbey. He left a will dated 8 Oct 1376.

1.. Edward of Woodstock: He was nicknamed the Black Prince because of his black armor. He was born at Woodstock, Oxfordshire, 15 June 1330. He married Joan of Kent, in a secret ceremony in spring 1361 and publically 6 Oct 1361. She was born 29 Sept 1328. He died at Westminster 8 June 1376 and was buried at Canterbury Cathedral. She died 7 Aug 1385 and was buried at Grey Friars, Stamford, Lincolnshire. They had two sons: Edward and Richard (future Richard II). He also had Roger Clarendon, by his mistress Edith de Willesford.

2.. Isabel of Woodstock: She was born at Woodstock, Oxfordshire, on 16 June 1332. On or before 1 May 1351 she was contracted to marry Bernard d’Albret. At the last minute she changed her mind, and the wedding never took place. She married at Windsro castle, Berkshire, on 27 July 1365 Enguerrand (Engerand Ingram) de Coucy. They had two daughters Marie and Philippa. She died 5 Oct 1382 and was buried in the choir of the church of Grey Friars (now Christ’s hospital), London. He died during the plague at Bursa, Anatolia on 18 Feb 1396/97.

3.. Joan of the Tower: She was born in the Tower of London about Feb 1335. She was contracted to marry about 17 Mar 1346 Pedro I of Castile-Leon. The marriage was never consummated. She died of the plague at Lormont, outside Bordeaux, France, on 2 Sep 1348 and was buried at Bayonne Cathedral.

4.. William of Hatfield: He was born before 16 Feb 1337 at Hatfield, near Doncaster, Yorkshire. He died before 8 July 1337 and was buried at York Minster.

6.. John of Gaunt: He was born at St. Bavon’s Abbey, Ghent, Flanders in Mar 1340. He married (1) Blanche of Lancaster at reading, Berkshire, 13 May 1359. She was born about 1340-43. They had four sons: John, Edward, John, and Henry (later IV). She died on 12 Sep 1368 at Tutbury Castle, Staffordshire and was buried in St. Paul’s Cathedral, London. He married (2) Constance (Constanza) of Castile-Leon at Roquefort, near Bordeaux, before 29 Sep 1371. She was born at Castrojeriz in 1354. They had one daughter, Katherine (Catalina). She died at Leicester 24 Mar 1394 and was buried in the Newark there. He had been having an affair with Katherine de Roet (Ruet) and had four children out of wedlock: John, Henry, Thomas, and Joan. Gaunt and Katherine married on 13 Jan 1395/96 at Lincoln Cathedral, Lincolnshire. Their four children were legitimized by assent of Parliament 9 Feb 1396/97. He died at Leicester Castle 3 Feb 1398/99 and was buried 16 Mar 1398/99 in St. Paul’s cathedral with his first wife Blanche. His widow Katherine died at Lincoln 10 May 1403 and was buried in the angle choir in Lincoln Cathedral.

9.. Mary of Waltham: She was born at Bishops Waltham (near Winchester) Hampshire, 10 Oct 1344. She married Jean (john) de Montfort about 3 July 1361 at Woodstock, Oxfordshire. He was born between 30 Sep and 8 Dec 1340. They had no issue. She died shortly before 13 Sep 1361 and was buried at Abingdon Abbey, Oxfordshire. He remarried.He died at Nantes, France, 1 Nov 1399 and was buried in Sait-Pierre Cathedral in Nantes.

11.. Thomas of Woodstock: He was born at Woodstock, Oxfordshire, 7 Jan 1354/55. He married before 24 Aug 1376 Eleanor de Bohun. They had one son, Humphrey de Bohun and Anne, Joan, and Isabel. He was murdered by suffocation by orders of the king at Calais 8 (or 9) Sep 1397, for treason. Eleanor died testate at Minoress Convent in Aldgate 3 Oct 1399. Both were buried at first in the Chapel of St. Edmund and St. Thomas the martyr in Westminster Abbey. His remains were removed in the reign of Henry IV to the Confessor’s Chapel.

12.. John of Surry (or Southerey): He was the son of Edward III and Alice Perrer, his mistress.

13.. John de Surry (or Southerey): She was the daughter of Edward III and his mistress Alice Perrers. She married before 14 May 1406, a man unknown.

Unlike his unstable father Edward II, King Edward III was comfortable in his own skin and had the common touch. He also cut a fine figure.

Edward’s chief asset was his personality. He was uncomplicated and likeable. He was flamboyant, extrovert, and generous. His household and his war retinue became centres of chivalry. He presided at splendid entertainments at court. He was addicted to practical jokes and fancy-dress parties. He fought in the lists himself, with the same reckless courage that he would later show in battle. For his humbler subjects, it was enough that he behaved as a king was expected to behave and favoured the sort of people whom a king was expected to favour. It is clear that even in their eyes he was more than a graven image of royalty. On campaign, he was capable of showing a common touch: pulling a bow at the butts with humble archers and playing the fool with the minstrels’ kettledrums. His household accounts have plenty of references to tips paid to ordinary people in whose houses he had rested on his travels. (Sumption 52-53).

The rest of the points are numbered for clarity and conciseness.

Edward I: Interesting Facts and Stories

Eleanor of Castile: Interesting Facts and Stories (married to Edward I)

Edward III: Better Than Most

Edward V: Prince in the Tower

Rolf or Rollo the Viking

THE HOUSES OF NORMANDY AND BLOIS

(They lived before Henry II)

Richard I, Norman Marquis and Count

Robert I, Duke of Normandy

Matilda: Wife and Queen of William the Conqueror

Dan Jones, The Plantagenets: The Warrior Kings and Queens Who Made England (New York: 2014).

Desmond Seward, The Demon’s Brood: A History of the Plantagenet Dynasty (Pegasus, 2014).