The illustrations must not be taken as perfect and all-revealing. Each has weaknesses. But they can still help.

1.. Is there a relational illustration of the Trinity?

Nothing is more relatable to us humans than love.

At the baptism of Jesus, the Father says that he loves the Son, and at that very moment, the Spirit descends and rests on Jesus (Matt. 3:16-17). Augustine seems to say that the Father loves the Son, who receives his love and returns it, for example, in his willingness to obey the Father and die on the cross, while the Spirit communicates the love between them.

This image of a triad of love expresses how the Father, the Son, and the Holy Spirit existed before the creation of time and the universe, and how the three persons will forever exist. It is into this love that the Trinity welcomes all believers and all who have received the love of God, through Christ and by the power of the Holy Spirit. (The Trinity Books VIII.14; IX.2, and XV.10)

In contrast, the strict unity of God seen in Islam or Judaism, for example, does not make sense in terms of the love of God, because divine love amounts to self-love. Inadequate and deficient.

Back to Augustine. His analogy is profound, because we have all experienced love from a lover, and we have returned the same love. But it still does not adequately explain how the one God shares this divine attribute of love and all the other divine attributes in three persons. Our human love is but a poor reflection of divine love.

2.. What about an image to illustrate the Triunity?

Note how the three persons Father (F), Son (S), and Holy Spirit (HS) are located in one circle—God. The dotted lines merely indicate their personal relationship, not a division in God.

Here is an ancient representation of the Trinity (Moody p. 207): 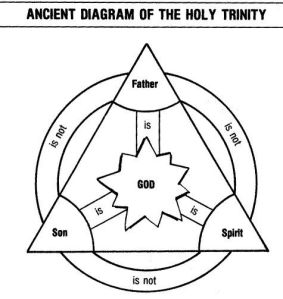 Geisler suggests a simple triangle, a simultaneous threeness in its oneness (p. 551).

4.. Can we build on the triangle idea?

The next illustration also works. The circle represents one God or unity or monotheism. The triangle symbolizes three persons: Father Son, and Holy Spirit: plurality or threeness.

Circle = One God = Unity or Monotheism

So this is Trinitarian (plurality) monotheism (unity).

Athanasius (A.D. c. 296-373) uses the radiance of the sun to express the Son being co-equal with the Father. The sun cannot help but radiate light–radiating light is in the sun’s nature. So the sun and light have the same essence or nature. Light proceeds from the sun. Likewise, the Father and Son have the same essence or nature, and the Son proceeds from the Father. So Athanasius described Jesus as Light (the Son) from Light (the Father)

Here the analogy breaks down a little–as all analogies do–but the main point is clear. The sun and light and heat–three things–go together as one, though they have different roles. All three elements co-exist as co-equals; one cannot properly exist without the other two, by the nature of the one thing.

You can try this illustration with your children and newcomers. But as usual, let’s not push illustrations or metaphors too far.

6.. Would God really exist in a complicated way like this?

This Q&A is repeated in several posts on the Trinity.

God is knowable as far as he has revealed himself through Jesus Christ, the Scriptures, the Holy Spirit who lives in us, and other avenues like the creation. However, God in his pure essence is unknowable. No one has seen God in all of his fullness, except Jesus (John 1:18). We humans down here on earth are limited by our five senses and our finite minds, so how can we figure out and calculate the pure nature of God?

C.. S. Lewis alludes to this in his book Mere Christianity, in the chapter “The Invasion” which discusses the Incarnation (God the Son becoming man), which can also apply to the Trinity. He writes:

It is no good asking for a simple religion. After all, real things are not simple. They look simple, but they are not. The table I am sitting at looks simple: but ask a scientist to tell you what it is really made of—all about atoms and how the light waves rebound from them and hit my eye and what they do to the optic nerve and what it does to my brain—and, of course, you find that what we call “seeing a table” lands in mysteries and complications which you can hardly get to the end of.

If we keep our knowledge of him simple, then we are not bothered by the deeper doctrines. But once we probe more deeply, we discover that God is ultimately a mystery in his pure essence.

I simply have to accept Scripture as it is, even when I don’t understand all of it.

I trust God in the teachings I do understand (e.g. God loves me and saved me), and that leads me to trust him in the ones that I don’t understand completely (the Trinity).

It is a blessing, rather, that I can experience the fullness of the God the Son and God the Spirit in all their deity. I can worship and pray to all three members of the Trinity and have the fullest experience with God. Wonderful!

Click on The Trinity: What Do Theologians Say? for their main point that the Trinity is ultimately a mystery.

So how does knowing about the Trinity help me know God better?

There is an entire ten-point post that answers that question, here:

The Trinity: What Does He Mean to Me?

ARTICLES IN THE TRIUNITY SERIES

The Trinity: What Are the Basics?

The Trinity: What Are Some Illustrations?

The Trinity: What Does the Old Testament Say?

The Trinity: Three Persons Together in the New Testament

The Trinity: What Do Theologians Say?

The Trinity: What Are His Roles in Creation and Redemption?

The Trinity: What Does ‘Only Begotten Son’ Mean in John 3:16?

The Trinity: What Do Arians and Jehovah’s Witnesses Teach?

The Trinity: What Are Defective Ideas?

The Trinity: What Are Replies to Objections?

The Trinity: Why Would God Seem So Complicated?

The Trinity: What Does He Mean to Me?

Elmer Towns came up with this table, which shows that each person of the Trinity shares the same attributes as one God:

Elmer Towns came up with this table too, which shows all three persons doing works that only God can: