God accommodated humanity when he inspired ancient authors to write infallible Scripture to ancient people. Now we follow him by accommodating ancient Scripture when it seems to make scientific claims about the world of nature.

We accommodate Scripture all the time. We do not read it literally in every verse, but make interpretational adjustments. We do it so often that maybe we just don’t recognize it.

Let’s define accommodationism by giving examples. Here is a list (slightly edited) of physical science claims in Scripture that we have to accommodate when we read it: 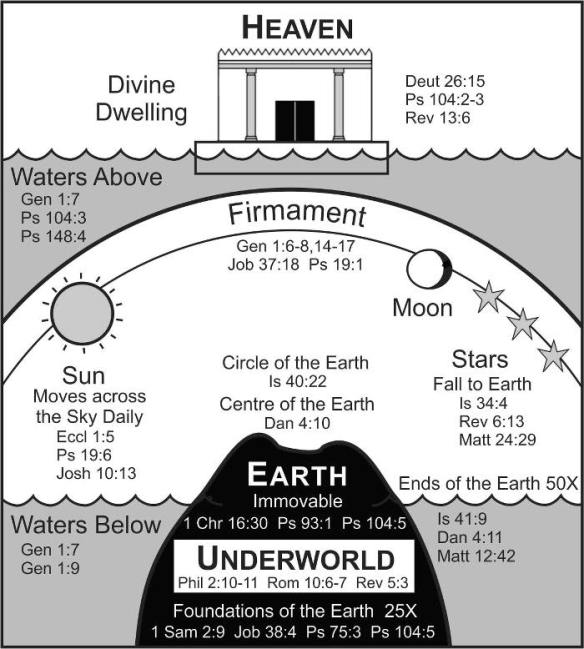 That image ultimately comes from Lamoureux.

If we were to take those items literally, we would make the Bible (and us) look foolish. My prediction: Other biblical claims about the natural world will have to be reinterpreted and accommodated, but since that would make some readers uncomfortable, let’s leave it for another post.

God used the language and images of the Ancient Near Eastern culture to fit the ancient biblical authors’ own times.

To allow for the biblical authors’ ancient culture and outlook; to adapt our interpretation of their claims about the world of nature to their own time; to make room for their limited knowledge about modern science; to relax about imposing our modern science on their texts that mention “science.” The Bible was written for us (and the entire globe), but it was not written to us (the entire globe).

That list teaches us that it is impossible to reconcile each item with our knowledge today of the world of nature. To make the valiant attempt is called concordism—or attempting to make ancient science and modern science fit together in detail in perfect concord or harmony. We can do this in the most basic of biblical physical claims about agriculture, like crops and rainfall and lilies and cows and milk. Call that soft concordism. But in forcing every single thing in the Bible about the natural world to match our knowledge of science today, we bring reproach on the gospel about truths that transform lives. To keep trying makes the eternal, spiritual claims about Christianity laughed to scorn.

That list was taken from theologian (Ph.D.) and biologist (Ph.D.) Denis O. Lamoureux’s book on p. 111. He writes about accommodation:

The Lord was good during my theological studies because he sent Christian professors to explain why God allowed the biblical writers to use the science-of-the-day. My instructors emphasized that God did not lie in Scripture. To reveal inerrant spiritual truths, God accommodated and came down to the level of understanding of these inspired authors. If the Lord had stated in the Bible that he created through the Big Bang and biological evolution, I doubt anyone in ancient times would have understood. Instead, God used incidental ancient sciences [listed above, for example] as vehicles to transport life-changing messages of faith. I have personally experienced this as well. My life has not changed by the ancient idea of a 3-tiered universe, but rather by the spiritual truth that Jesus is Lord over the entire creation (Phil. 2:10-11), emphasis added. (pp. 110-11)

That is, God accommodated and inspired the ancient authors to speak about incidental things (see the list) in a way that the ancient audience or readers could understand as they all observed the world from their limited perspective and knowledge. Then God used those incidental things to convey spiritual and eternal truths about salvation and justice and mercy and redemption and the ultimate purpose of animal sacrifice, and so on.

The ultimate example of accommodation: About seven decades before the temple was destroyed in A.D. 70, God sent his eternal Son to become man so we could understand the Father better and more clearly. The Father accommodated us through Christ, the Man.

Following him, we can accommodate Scripture in that list and must not interpret the items literally. Accommodationism does not damage eternal truths, like the Lordship of Christ and living in the Spirit.

Is Our Sin Nature Embedded in Our Mammal Nature?

Interpreting the Bible and Accommodation

Augustine Says No to Silly Interpretations of Genesis

1.. Genesis 1-11 in Its Ancient Religious Environment

4. Save Our Ship! Rescuing Noah’s Ark from Flood of Science

5. The Real Significance of Genealogies in Genesis 5-11